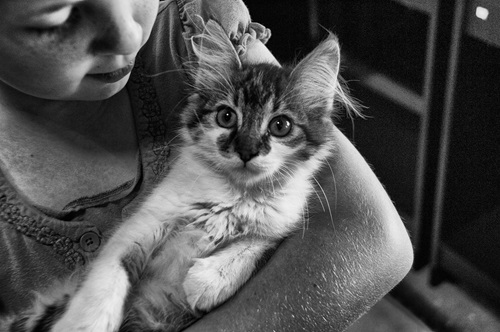 I had always wanted a cat. For years I had begged my parents for one, but I was never allowed to get one. That's why when my
Mum asked if I wanted to go to the SPCA to look at kittens, I jumped up and ran to the car immediately. My brothers and dad
were out, so it was just me and Mum. In the car it was incredibly hot, but I didn't mind. I was busy arranging my scarf on the
empty seat beside me. Once I'd finished, I asked mum how it looked. She laughed. “You have to take the cat home in a box honey,
otherwise it would get frightened and jump everywhere.”

Finally, we arrived at the SPCA. Mum walked straight up to the front desk, while I ran to the back of the shelter to see the
kittens. There were three, all cuddled together in a cat bed. The sign on the glass said they were from the same litter, two
females and a male. One of the female kittens stood up and walked over to a small toy, and started to play with it. “She loves
doing that.” the voice startled me, but it was just an SPCA volunteer. “My name’s Sarah, I work with the cats here at the SPCA.”
she said. As she spoke the male kitten started meowing. “He meows when he's hungry, which is all the time!” She said with a
smile. Sarah watched me as I stuck my finger through the crack in the door, and laughed when one of the female kittens walked
over to it and started to lick it.

Just then, Mum walked over. Under her arm was a large tray, and in her hand were two bags, one with kitty litter, and one with
kitten food. She saw the kitten licking my finger. “Do you like that one?” she asked me. I couldn't believe it, we were getting a
cat! “Yes, yes I do mum.’ I stammered eagerly. Mum turned to Sarah and, in a quiet voice, said something to her. Sarah went to
the counter and returned with a small cardboard box. Then she turned to the glass door and unlocked it. The kitten that licked my
finger was still standing there, and Sarah picked her up gently. She turned to me, and held out the kitten.”Here,” she said. “I'll
show you how to hold her.” She put one of my hands under the kittens back legs, and the other hand around her shoulders. I lifted
the kitten up and was amazed by how light she was. Sarah held up the travel box, and I carefully placed the kitten inside. “Now,
they’ve been desexed already, so there’s no need to worry about that,” said Sarah, “But she does need a vaccine in three weeks,
so bring her in and we can worm and flea her at the same time. The vaccine is really important to help her stay healthy.” The door
shut with a click, and within ten minutes, I was back in the car again. But this time, there was a kitten nervously bobbing its
head inside the travel box, taking in all the new sights, smells and noises. “Open the window dear, she might overheat.” Mum
said. I slowly wound down the window until a gentle breeze filled the car.

The car trip went fast, and within no time we were home. I jumped out of the car, and carefully slid the travel box along the seats
and out the car door. I staggered up our driveway with it, and burst through the door. I knelt down and was about to let the kitten
out when mum walked in. “No honey, she will get too overwhelmed and might run away” she said. ”here, let her out in the sitting
room and we’ll keep her in there for a few days until she gets used to living with us.” I stood back up, and carried the kitten back
along the hallway to the sitting room. I shut the door behind me, and let the kitten out. She was tiny, with black and white
patches all over her chest and feet. “Hey kitty,” I whispered. The kitten took a tiny step towards me, and then darted under the
couch.

I stood up, and quickly left the room, and headed for dad’s study. That’s where our family keeps all of our paper and art supplies. I
grabbed some paper, tape and string, and then tip-toed back to the sitting room, where I could hear little thuds from the kitten
running around. I slipped in and shut the door quickly behind me, and for the next hour or two, sat on the floor with the kitten
watching me intently as I made her countless numbers of toys. They were mostly paper tassels, but also a paper mouse
attached to some string, which she pounced on. I’d read somewhere that kittens love playing with small soft toys, but dislike
any big sharp noisy ones. Suddenly I heard a shout coming from outside. My brothers were home.

The kitten meowed and darted back under the couch. I ran out of the sitting room and into the hallway. My brothers were
bounding down the hall, covered in mud from biking. “Stop!” I hissed at them. They made a face at me and continued towards the
sitting room. They were bursting with excitement and wanted to see the kitten. They burst through the door, and immediately
started to make childish squeals. ”Awww, its so tiny!” cooed my younger brother. “Guys!” I whispered, “you’re scaring her!” Just
then Dad walked in. “Boys,” he said calmly. “You need to be quiet around the kitten, newly introduced kittens need lots of time
and space to get used to their new home.” He somehow managed to persuade my brothers to leave. Dad walked towards me
with a bowl in one hand and a kitty litter tray in the other. He placed the bowl by my feet, and then put the kitty litter tray in the
corner of the room. “Here kitty kitty” he called. The kitten timidly walked out from under the couch, and over towards the bowl,
which was filled with cat food. She lowered her head gracefully, and started noisily chewing on the food. “The boys will need
some time to learn how to give her space” dad said. “Here, see how I put the kitty litter away from the food, cats don’t like
having food in the same place as their litter tray. When she is old enough to go outside she won't need a litter tray.” Just then,
the kitten waddled over to the tray, and scratched around in the kitty litter. She dug a small hole, and quickly went to the toilet.
Then she stood back and covered it. I laughed at how dainty she was being. Dad stood up and left the room. “Don’t want to crowd
the cat,” he said, but I think he was just leaving me alone to be with her.

I sat and watched the kitten explore, and thought about cat names. I tried saying a few, but the kitten looked up at only one or
two. “Pecan” I would call, and the kitten would give me a questioning glance as if to say ‘Are you talking to me?’ I sat with the
kitten until late in the evening. Eventually I grew tired, and sadly made my way back to my bedroom. I could hear the kitten
meowing again and again. She was missing her brothers and sisters. I lay on my side feeling sorry for her. The minutes went past
slowly, with her meowing constantly. It was midnight when she stopped, and I finally got some sleep. It made me sad that she
was crying, but I knew that after a few weeks she would used to her new family, and would sleep with me every night.